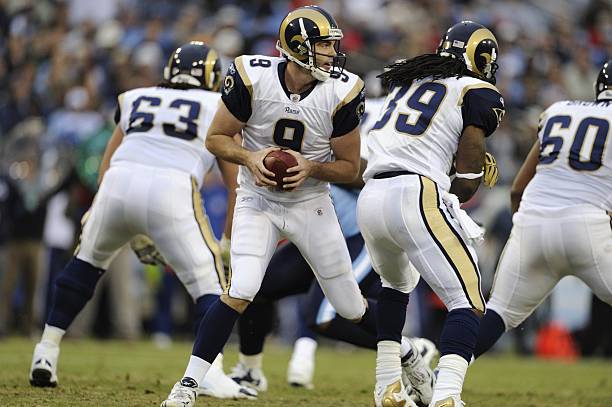 The 2017 was a success. Despite a tough playoff exit, the Los Angeles Rams earned their first winning season since 2003.

That’s an incredible 13 years. A lot happened during those years. The Rams produced some great moments, but they also recorded some of the worst in their history. I’ll be laying the twilight years to bed with two articles: one covering the seven best moments of the drought, and one covering the nine worst.

Lets take a look at the bad ones:

Bad teams are normally bad because they don’t know how to draft. The St. Louis Rams of the 2000’s were a prime example of this. The team muddled its way through several horrid drafts, but few were worse than the 2007 NFL Draft:

Remember all the iconic moments these guys had in Rams uniforms? Well, neither do I. Not a single player on this list became a contributor for the team. Adam Carriker put together a decent career after a slow start. Unfortunately for the Rams, his entire tenure with the team was his slow start. Carriker had a successful stint in Washington after the Rams let him go.

What about Brian Leonard? He produced a decent career in Cincinnati and all things considered wasn’t really a bust. But can we acknowledge how ridiculous of a pick this was? The Rams’ most important player was Steven Jackson in 2007. The team had plenty of holes on the depth chart and could have used help pretty much anywhere, especially at wide receiver or on the offensive line. So what do the Rams do? They draft a running back. Leonard showed flashes for the Rams before the team cut him after just two seasons.

The Rams wrote the book on how not to build a team during these dark ages. Can you believe this wasn’t the worst draft class on the decade?

Following up a promising 2010 season, the St. Louis Rams found themselves playing on Monday Night Football against the New York Giants early in the 2011 season. I reminisced on this painful memory a few weeks back, so click here to relive how painful this game was. Sam Bradford started out the 2013 NFL Season by playing the best football of his young career. He recorded three games with three touchdowns and zero games with multiple interceptions. The Rams were struggling, but the franchise quarterback was rekindling the potential he flashed as a rookie.

Then disaster struck: Bradford tore his ACL running out of bounds in just the seventh game of the year. He had a history of injuries, and adding an ACL tear to the catalog was frightening for any Rams fan. Bradford didn’t play another snap that season, and Rams fans got to enjoy Kellen Clemens for the remainder of the season.

The Jeff Fisher-led Rams still finished 7-9 despite having Clemens at quarterback. Bradford finished his season with 14 touchdowns and four interceptions.

I mean this sincerely: what the **** were they doing?

Anybody who could name the position of half of these guys should get a medal. Every single player in this class was an undisputed bust. The team had three third round picks in 2006 and didn’t hit on any of them! They drafted two tight ends and failed with both of them.

Is there a worse draft class than this in the history of the league? I’d love to see it. This class set the Rams back for a decade. Not one of these players produced a decent NFL career.

5: Case Keenum Gets Concussed, Stays on the Field

This sequence still infuriates me rewatching it. On a meaningless play, future Minnesota Vikings legend Case Keenum suffered a vicious sack, which resulted in his head being slammed on the ground. Keenum lied down, lifeless, for a few seconds before getting up and trying to figure out where he was. Everybody watching knew that he needed to enter concussion protocol at the very least.

Except for Jeff Fisher, apparently. Keenum stayed in the game, threw an incomplete pass to Wes Welker before being fumbling the ball and costing the Rams the game. This loss clearly wasn’t on Keenum; it was on the coaching staff for blatantly playing somebody with a concussion.

Safety should be the priority above all else. Anyone who has played football and seen somebody concussed go back into a game knows how scary it can be. This was one of the most embarrassing moments of my time as a Rams fan. I still can’t believe Keenum went back into that game. The reincarnated Los Angeles Rams entered the 2016 season with plenty of buzz. They just moved to a new city, they drafted a quarterback No. 1 overall, they brought back the 2015 NFL Offensive Rookie of the Year, and they just wrapped up a month-long stint on HBO’s Hard Knocks. All this resulted in a Monday Night showdown against the San Francisco 49ers up in the bay.

I was confused as to why this game wasn’t being played in Los Angeles, but it turned out to be a blessing in disguise. Jeff Fisher’s Rams delivered one of the most embarrassing performances in the history of the franchise. 49ers quarterback Blaine Gabbert tore apart the Rams defense in the first half while Case Keenum’s offense was shut out. Aaron Donald got ejected late in the game and gave us the photo that accurately sums up the 2016 season. This is one game I wish I could forget.

This one was tough. After suffering a season-ending injury in 2013, Bradford looked to return to the Rams in 2014 and pick up where he left off. Bradford had a solid (in theory) crop of players around him: Zac Stacy, Tre Mason, Tavon Austin, Kenny Britt, Jared Cook, Stedman Bailey, and Chris Givens. He was playing the best football of his career when he got injured. Expectations were high for Bradford on his return.

Unfortunately, we never saw the return. Bradford re-tore the ACL that kept him out in 2013 during the preseason. Shaun Hill and Austin Davis led the Rams to a 6-10 record, and the Rams traded Bradford to the Philadelphia Eagles for Nick Foles in the offseason.

Meanwhile, in an alternate universe, Bradford never got injured, Fisher never got fired, and the duo have been leading the Rams to 7-9 seasons for the last five years.

The record he was chasing belongs to Keith Null, a 6th round draft pick who started four games in his NFL career, all for the 2009 St. Louis Rams.

Null completed 28 of 44 passes with one touchdown and debut-record five interceptions. The Rams were dominated up and down the field by the Titans in every aspect of the game. It was the lowest moment in the worst season in the history of the franchise. If you’re looking for the rock bottom moment during this epic losing streak, look no further than this game. The Rams only really came close to the playoffs one time during these twilight years.

The 2009 Rams may have had the worst season in franchise history, but the season delivered the Rams the first overall pick. The Rams selected former Heisman Winner Sam Bradford with said pick. Bradford played a major part in turning the ship around, teaming up with Pro-Bowl running back Steven Jackson to give the Rams a competent offense for the first time since 2006. Pair that with a solid young defense and you created something Rams fans had not seen in years: an actual football team.

The 2010 St. Louis Rams weren’t a good football team, but the stars aligned for this young group. Despite a losing record, the Rams were in first place in the NFC West at 7-8 with one game to go in the season. A showdown with the 6-9 Seattle Seahawks in the final game of the season would determine who went to the playoffs. The Seahawks were on a three-game losing streak and missing star quarterback Matt Hasselbeck. All the Rams had to do was beat a Seahawks team in freefall and they would clinch their first playoff berth since 2004.

So what happened? Clipboard Jesus happened. Charlie Whitehurst, a journeyman backup quarterback thrust into action without Matt Hasselbeck, took advantage of his second career start and carried the Seahawks to the playoffs. Whitehurst threw the lone touchdown of the game, a four-yard touchdown pass to Mike Williams on the first drive of the game. Nobody scored another touchdown in this 16-6 snoozer. Nobody even kicked a field goal longer than 40 yards. Rather than going out swinging, the Rams lost a game where the last 50 at bats were walks or strikeouts.

What happened after this game makes it even harder to swallow. Despite two underwhelming 7-9 seasons to start his career in Seattle, Head Coach Pete Carroll’s 2010 season was enough to keep him in charge of the team. Carroll’s Seahawks then made the playoffs for five consecutive seasons and won a Super Bowl before the Rams ended their reign of terror in 2017. The Rams shuffled through three different coaches, what felt like thousands of quarterbacks and millions of losses before this season turned everything around.

The only saving grace from the Clipboard Jesus game? Had the Rams won, we would have lost one of the most iconic plays in recent NFL history. Maybe everything happened for a reason?

The 2017 season was the first time in ages it was fun to be a Rams fan. There were some positive moments in the dark years though, which we will cover in the companion piece to this article. Stay tuned. 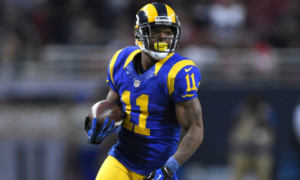