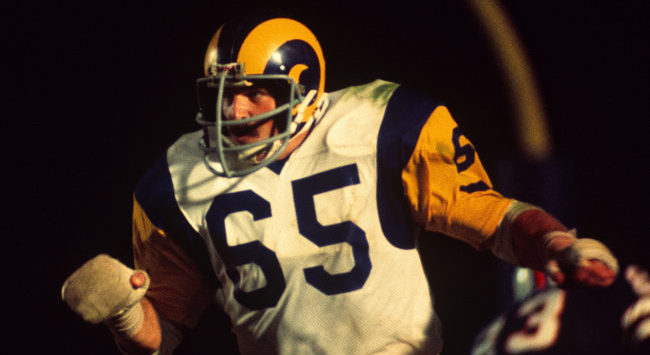 The Los Angels Rams have produced a great history of Hall of Fame offensive linemen, with four of their own enshrined at the Pro Football Hall of Fame in Canton. The first of this group was legendary guard Tom Mack.

Tom Mack was selected second overall in the 1966 NFL Draft by the Los Angeles Rams. Mack got a shot to play in the fifth game of the season as a rookie, replacing an injured Don Chuy. No one else would start at left guard for the next decade.

Mack appeared in every single game during his 184-game tenure with the Rams, trailing only Jack Youngblood and Merlin Olson for most consecutive games played in franchise history. The Rams were one of the best teams in the league with Mack playing guard. While guys like Deacon Jones and Jack Youngblood anchored the defense, Mack paved the way for the offense to succeed. The Rams won 72% of their games while Mack was starting at guard.

Mack’s play did not go unnoticed. He was selected to five All-Pro teams and 11 Pro Bowls during his 13 year career.

Canton took their sweet old time to induct Mack into the Hall of Fame. Despite retiring in 1978, he didn’t earn his spot until 1999, but  Mack was still the first Rams offensive linemen to be inducted into the Hall. He was in the same Hall of Fame class as fellow Rams legend Eric Dickerson.