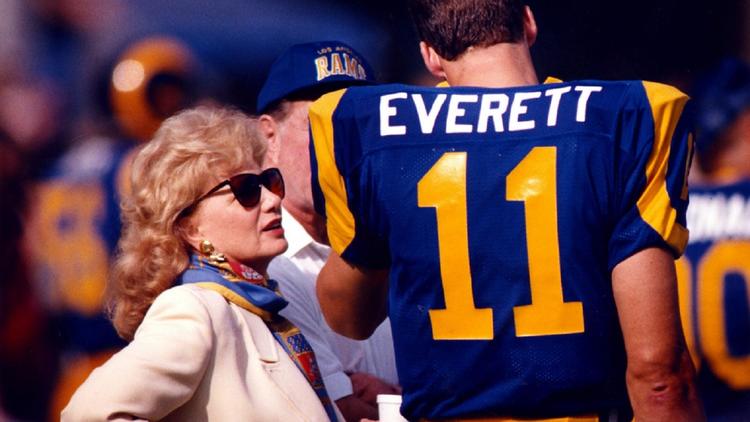 Rams owner Georgia Frontiere talks with quarterback Jim Everett at Anaheim Stadium in a game against the Chiefs on Nov. 10, 2001. Frontiere was booed as she came onto the field. (David Muronaka / Los Angeles Times)
Share
Tweet
Share
Share
Email
Comments

The Los Angeles Rams were coming off of another division championship. Owner Carroll Rosenbloom was putting the final touches on the team’s future move to Anaheim. Things could not be any better for Rosenbloom entering his eighth season leading the franchise. His vision of what his football team would be was finally coming into place.

That future came to a halt on April 2, 1979. A neighbor spotted Rosenbloom off the coast of a Miami suburb drowning in aggressive sea water. Although rescuers got to Rosenbloom in a quick fashion, efforts to resuscitate him proved to be unsuccessful. His wife Georgia Rosenbloom (later Frontiere) assumed ownership of the team. The team’s fate in L.A. changed forever.

Frontiere immediately began undoing the legacy of Caroll Rosenbloom. Shortly after her husband’s passing, Frontiere fired her stepson and general manager Steve prior to the start of the 1979 season. Frontiere installed a new staff, including John Shaw. He oversaw most of the football operations for the remaining time the team was in Anaheim.

Frontiere became an astute owner, which ran somewhat opposite of her bubbly public persona. She let Shaw make most of the moves pertaining to football, but she was not afraid to stick her head in the football part of the business when she felt it was necessary. Frontiere infamously struck a deal with Colts owner Robert Irsay for veteran QB Bert Jones in exchange for two first-round picks: the fourth and 14th picks overall in the 1982 NFL Draft. The deal proved to be a disaster for the Rams. Jones failed to make the impact many hoped in L.A., and the two lost first-round picks set the Rams back. In the end, Frontiere sought to make the big splash, for better or worse for the Rams.

The Rams rebuilt quickly, led by star running back Eric Dickerson. Former USC head coach John Robinson took the reins and built the offense around Dickerson, which resulted in the Rams making the playoffs in five of six years starting in 1983. The product on the field was entertaining. The team was winning consistently. Unfortunately, the fans stayed up north to the Coliseum to see the Raiders. When the Rams moved south to Anaheim, many fans chose to stay away. The team backed off its marketing and basically forfeited the market to the Silver and Black. In 1985, the Rams went 11-5 and won the NFC West. Yet, they could not sell out Anaheim Stadium save for games against the 49ers and the Raiders. A Rams insider best described the Rams marketing like this:

”There is no marketing man in the organization. There is no one taking charge there. If it weren’t for John Robinson, I hate to think what the team would have become.”

The Rams fan base dwindled as the 1980s progressed, and as the team moved to the 1990s, their performance on the field went south as well.

Steaming Towards the End

Frontiere’s front office led a significant downfall of the team’s performance on the field. The Rams’ last five years in L.A. were awful. Their last winning season was in 1989, when the Rams came within one game from reaching the Super Bowl. Beginning in 1990, the Rams lost 10 games or more in each of the last five seasons in Southern California. Additionally, the front office led a full roster turnover.

The exodus of talent and a poor stadium situation took its toll on an already shrinking football audience in Los Angeles, leading to local television blackouts, which in turn exacerbated the problem. Attendance year after year continued to shrink, with the Rams averaging 42,312 fans in attendance in 1994. After initially denying the relocation rumors in 1993, Shaw eventually conceded that the team had to look at other options to keep the team viable. The lack of commitment from ownership turned off a struggling fanbase.

By 1993, Frontiere was looking for greener pastures elsewhere, and she or Shaw didn’t hide it. In the final part of this series the Rams begin the process to move away from Los Angeles.

Martin Cruz is a staff writer for Rams Talk. You can find him on Twitter @MCruz1988.