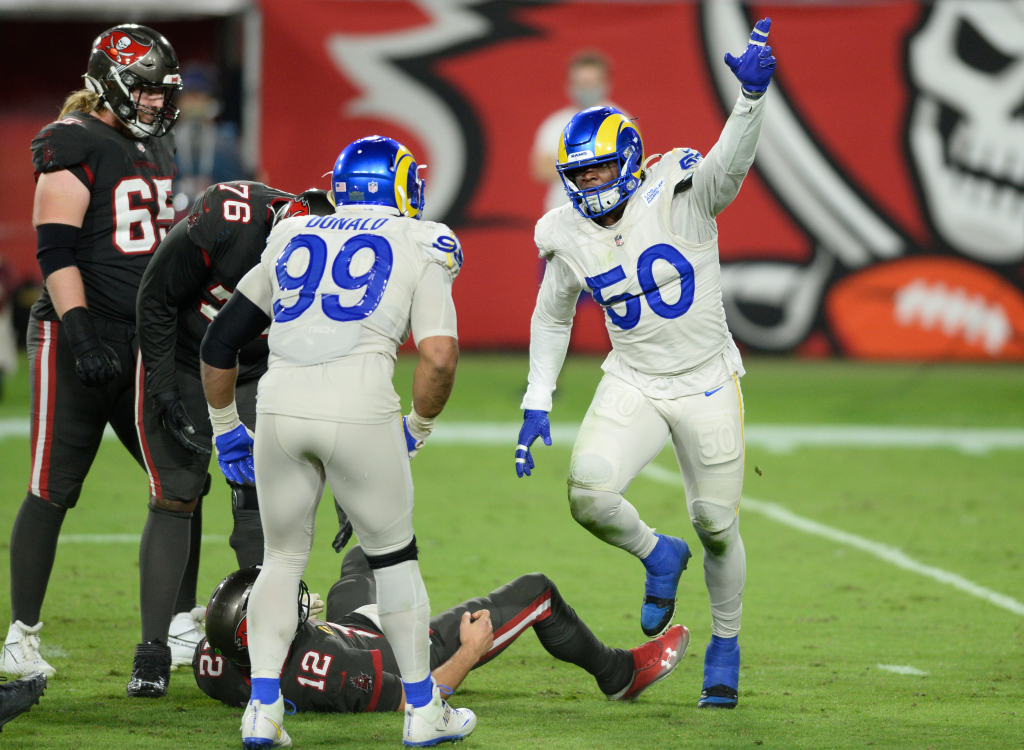 Jared Goff and Tom Brady hit the airwaves on Monday Night Football and it just wasn’t for a telecast. Goff, rounding out to be an ultimate professional, far outplayed the G.O.A.T. quarterback, and led the Los Angeles Rams into first place in the NFC West with a 7-3 record and control of the division title race by way of a win over Seattle, who is also 7-3.

This game had no shortage of heroes, superlatives and storylines. Besides Goff, Robert Woods, Cooper Kupp, Matt Gay, Jordan Fuller, Brady’s snub of Goff for a post-game handshake and the running game. The Rams evened their road record to 3-3 with a tidy 27-24 win over the Buccaneers.

Brady’s self-centered actions, and post-game pouting proves one thing, he is a sore loser! He is more than happy to meet the opposing QB at mid-field after a win, but when it comes to Nick Foles (Bears) and Goff, he’d rather shuffle off to the locker room. Good night Tom!

In a game that saw 99 passes attempted, Goff proved to be a different type of QB for the Rams. Gone was the running game (20 attempts for 37 yards), and the play action pass along with it. Goff completed the second most passes for a MNF game with 39 completions for 376 yards and three touchdowns. Without the PAP, Goff became the unrecognizable pocket passer, proving he could do this well and against a top-rated defense.

I am not even that upset with the two interceptions. Realistically, if you throw the ball around the yard 51 times, you are bound to find the wrong team. The second INT could have hurt worse as it gave Brady a last shot to engineer yet another game-winning drive.

But this isn’t the same Brady that hadn’t lost to the Rams since 2001, and included two Super Bowl wins over L.A. This Brady has issues when pressured defensively. He throws short, long and has tendencies to throw interceptions as a result. None was bigger than Jordan Fuller’s second of two Brady INTs (26/48, 216 yards, 2 TDs), where pressure in the backfield forced the GOAT to overthrow his receiver and sealed the win in Tampa Bay.

We came into this game expecting a defensive gem and were not let down. The teams came in as the No. 2 (Rams) and three teams in second-half defense, with the Rams No. 2 overall in the NFL. Head Coach Sean McVay wanted to come out of the first half with 17 offensive points and turn the game over to the stout defense, which is exactly what he got.

McVay’s L.A. teams are now 31-0 after leading at the half, with the lead securely in their pocket, the Rams defense tightened and gave up just 10 points. In all, they held a normally good, but uneven Tampa Bay offense, to just 258 total yards.

Former Buccaneer Matt Gay kicked a 40-yard field goal with 2:36 remaining in the game to put the Rams ahead. All of this after he arrived in L.A. this week after being signed off of the Colts practice squad. He passed through the mandatory COVID-19 protocol and joined the team for practice Saturday, two days before facing the Bucs.

“Watching the way Matt handled himself throughout the game, you could feel there was a lot of confidence,” McVay said. “I know he had the one miss, but you can tell the difference between a ‘miss’ and then one of those where ‘that looks a little shaky.’ He was true all night. Great height, good timing, and he was very accurate. I loved what he did. It was a great snap, great hold, great operation. He made it, and it was as true as it gets.”

Part of the Rams frustration this season has come from the kicking game, as Samuel Sloman and Kai Forbath were inconsistent with their kicks. Neither fared well in putting the ball into the end zone for touchbacks, or through the uprights on field goals and extra points.

Gay’s rookie season in Tampa Bay wasn’t overly impressive statistically, so this jurist is still out on him, but his storybook week of going from a practice squad, to a playoff contending team, a MNF primetime game, against his former team of just a year ago, and getting the game-winning kick is a script that just isn’t written often, if at all.
The Rams set the tone early in the game, as Goff once again came in firing on all cylinders. Kupp was his initial go to guy, but eight other receivers got into the action as well. Kupp (145 yards) and Woods (12 catches) finished with 23 receptions, and 275 yards between them. Also offensively, Rams rookies Van Jefferson and Cam Akers both scored their first NFL touchdowns, both on pass plays.

The Rams return home Sunday, where they are 4-0, to take on the 49ers. San Francisco handed them a loss in Santa Clara earlier this season. We have talked about the importance of division wins, the Rams are 1-1, over the season. This one will be no different. L.A. must continue to play well and not look past the bad luck, last place 49ers where the team  currently finds themselves at.

A win Sunday will set the team up for more momentum when bigger games against Arizona and Seattle come up.