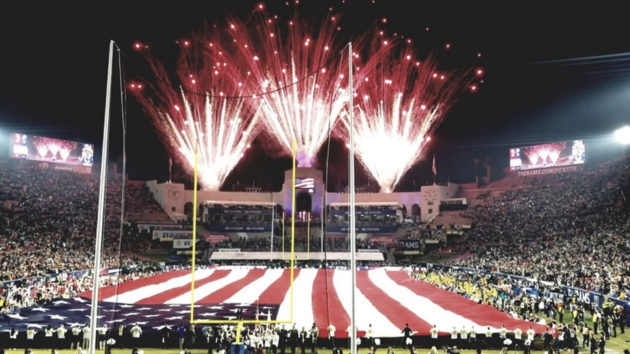 The Monday Night Football game held on November 19, pitted two of the league’s best offenses playing for bragging rights. This battle of one-loss teams lived up to the hype, delivering not only to respective Los Angeles Rams and Kansas City Chiefs fans, but instantly became an NFL classic.

It was more than just a game, it truly felt different, albeit an important marquee win for the Rams. Even more awe-inspiring is the story beyond the game itself. Los Angeles faced several tragic events in the weeks leading up to this game.

It all began with a mass shooting in the Thousand Oaks area, just minutes away from the Rams’ facility. This resulted in a dozen people losing their lives. The next day wildfires ravaged through a large part of the Southern California region. The devastation affected both the Rams organization and local residents.

The Rams organization is a frequent contributor to the local community, and  it responded immediately to these unfortunate tragedies. Rams players and personnel still supported their community despite facing evacuations as well.

The game was scheduled for Mexico City, but the NFL moved it to Los Angeles due to poor field conditions. The Rams preferred this “home” game at the L.A. Memorial Coliseum. Home field advantage is always desirable, but none more than in this case. It directly affected the playoff picture, but the Rams wanted this win for the fans, community and for L.A.

The Rams step up

Having only six days to prepare the Coliseum, the Rams quickly sent a message to the region: this event was for L.A. and to honor all the recent victims. The first responders were honored by carrying the American flag onto the field. A hauntingly beautiful rendition of the National Anthem was sung by a young choir, deeply saddened by having lost one of their members in the Thousand Oaks shooting.

Then members of the Thousand Oaks Ventura County Sheriff’s Department joined the family of the fallen Officer, Sgt. Ron Helus, to honor him and the others fallen with a ceremonial lighting of the Coliseum torch.

As an added bonus, the highly-anticipated game was historic, becoming one of the most incredible games I have ever seen. But amidst the context of recent events, both the team and its fanbase bonded in unity. The team played their hearts out for the fans. The fans responded by transforming into the intimidating 12th man that opposing fans often fill our stadium.

The tide changed during this profound win. The Rams were no longer just an L.A. team, but integrated members of the So. Cal community they call home. Even after the hard-fought victory, both Jared Goff and Whitworth spent time with the Thousand Oaks victims’ families, a true testament of character and compassion.

“It was good to get in front of our fans in a time like this where there’s been a lot of stuff going on in the last couple of weeks,” Goff said in a postgame interview. “Hopefully we could provide some joy, some normalcy in the last few hours and some fun and, hopefully, get their minds off of whatever they’ve had to deal with.” This was the resounding sentiment from most Rams players interviewed after the game.

The banners around the stadium and the towels given to over 77,000 fans in attendance truly summed up this emotionally-charged night: “LA TOGETHER.”

It matters to me

I’ve experienced first-hand the life-changing impact resulting from a fire and also stared down a loaded gun. Being die-hard Rams fan, I am truly thankful for what this  organization gave to its fans and their L.A. community. I now have, a new-found respect and admiration for the team I have watched loyally throughout my entire life.