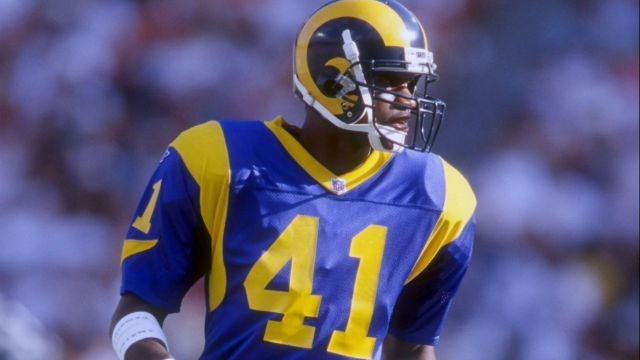 A mainstay of the Rams defense throughout the 1990’s, Todd Lyght enjoyed a long NFL career with the team in Los Angeles and in St. Louis.

Lyght played his college football at Notre Dame where he featured on the Fighting Irish’s 1988 National Championship winning team at the cornerback position. After a successful career in college under Lou Holtz, the Los Angeles Rams drafted the Jim Thorpe award winner 5th overall in the 1991 NFL Draft.

As a rookie, Lyght started eight of the 12 games in which he played, recording 37 tackles and one interception. Lyght continued to provide solid corner play throughout the team’s remaining years in L.A. Soon after the franchise moved to St. Louis, Lynch signed a 5-year contract extension to ensure he would spend the rest of his prime years with the Rams.

Lyght’s best year came when the Rams won their first and only Super Bowl in the 1999 season. Lyght earned his only Pro Bowl appearance, recording 65 tackles and interceptions. He also compiled 2.5 sacks and forced a fumble.

After spending two seasons in Detroit, Lyght retired after the 2002 season and went into coaching. He held various jobs as a head coach at the high school level and landed a coaching position at the University of Oregon in 2011. He spent a couple seasons in Oregon and then reunited with Kelly on the Philadelphia Eagles coaching staff as defensive backs coach two years later.

Lynch returned to his alma mater in 2015, where he is currently a defensive backs coach for the Fighting Irish.